NEWS
You are here: Home » News » A Brief History Of Challenge Coins(1)

A Brief History Of Challenge Coins(1)

A Brief History Of Challenge Coins(1)

There are many traditional examples of establishing comradeship in the military, but few are as respected as carrying challenge coins. The challenge coin is a small commemorative medal or symbol that a person is a member of an organization. Although "challenge coins" have entered the lives of ordinary people, they are still a mystery to people outside the military.

Generally speaking, "challenge coins" are about 1.5 to 2 inches in diameter and about 1/10 of an inch thick, but the styles and sizes vary greatly-some even have unusual shapes such as shields, pentagons, arrows, and dog tags. These coins are usually made of pewter, copper or nickel, and are available in a variety of finishes (some limited edition coins are gilded). These designs can be very simple, such as engraving the logo and motto of the organization, or they can be enamel protrusions, multi-dimensional designs, and hollow parts.

Challenge the origin of coins

It is almost impossible to know exactly the traditional origin and reason of the challenge coin. One thing is certain: the history of coins and military services is much older than our modern era.

One of the earliest examples of conscriptions receiving monetary rewards for bravery occurred in ancient Rome. If a soldier performs well in the battle that day, he will get his salary that day and a separate coin as a bonus. There are reports that the coin was specially minted with the logo of the legion it came from, which prompted some men to use the coins as a souvenir instead of spending them on women and wine.

Today, the use of coins in the army is more subtle. Although many coins are still used as rewards for outstanding work, especially for those who participated in military operations, some managers exchanging coins are like exchanging business cards or signatures, and they can store them. Soldiers can also use challenge coins customized similar to identity badges to prove that they have served in a particular unit. Some coins were distributed to civilians for publicity and even sold as tools to raise funds.

Although no one knows how the "challenge coin" was produced, there is a story that dates back to World War I, when a wealthy officer gave a bronze medal with the emblem of the flying squadron to his soldiers. Soon after, a young ace pilot was shot down and captured over Germany. The German took everything from him, except for the small leather bag hanging around his neck, which happened to contain his medal.

The pilot escaped and fled to France. But the French thought he was a spy and sentenced him to death. In order to prove his identity, the pilot presented a medal. A French soldier happened to recognize the sign, so the execution was postponed. The French confirmed his identity and sent him back to his troops.

One of the earliest challenge coins was minted by Colonel "Bison Bill" Quinn of the 17th Infantry Regiment, who made these coins for his soldiers during the Korean War. One side of this coin is a buffalo, a tribute to the creator, and the other side is the emblem of the legion. A hole was drilled in the top so that men can wear it around the neck instead of in a leather bag.

There are stories that this challenge began in Germany after World War II. The Americans stationed there have inherited the local tradition of conducting "Finney checks." "Pfennig is the lowest denomination coin in Germany. If you don't have Pfennig when you receive the check, you can only buy beer." This practice has evolved from a split bar to a unit's medal. The members will "Challenge" the opponent by smashing the medal against the bar. If any member present does not receive his medal, he must buy a glass of wine for the challenger and all the other people holding coins. If all members have their medals, the challenger must invite everyone to drink. 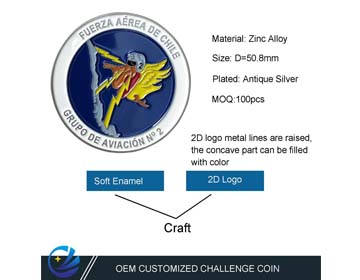