NEWS
You are here: Home » News » A Brief History Of Challenge Coins(2)

A Brief History Of Challenge Coins(2)

A Brief History Of Challenge Coins(2)

In June 2011, Secretary of Defense Robert Gates (Robert Gates) visited Afghanistan's military bases before he was about to retire. Along the way, he shook hands with dozens of soldiers. To the naked eye, this seemed to be a simple exchange of respect. In fact, this was a secret handshake, and the recipient had a surprise-a special challenge coin for the Minister of Defense.

Not all challenge coins are passed through a secret handshake, but this has become a tradition that many people adhere to. It may have originated in the Second Boer War between British and South African colonists in the early 20th century. The British hired many mercenaries, and because of their mercenary status, they could not get the Medal of Valor. However, it is not uncommon for the commanders of these mercenaries to accept accommodation instead. There are reports that sergeants often sneak into the tents of officers who have been unjustly awarded medals and cut the medals from the ribbons. Then, in a public ceremony, they would call this well-deserved mercenary to the front, hold the medal, shake hands with him, and hand the medal to the soldier, indirectly thanking him for his service.

Challenge coins became popular during the Vietnam War. The first coins of this period were made by the 10th or 10th Special Forces of the Army. They were nothing more than ordinary currencies with a military logo printed on one side, but the soldiers held them proudly.

However, more importantly, it is much safer than the bullet club, whose members always carry an unused bullet with them. Most of these bullets are used as rewards for surviving the mission. They think this is the "last bullet" that can be used to deal with themselves instead of surrendering when failure is imminent. Of course, carrying bullets is just a way to show masculinity. Therefore, pistols or M16 bullets were initially used, and they were quickly upgraded to 0.50 caliber bullets, anti-aircraft bullets, and even artillery bullets to compete for the first place.

Unfortunately, when members of these "bullet clubs" "challenge" each other in the bar, it means they are throwing live ammunition on the table. Fearing a fatal accident, the command banned the use of this weapon and replaced it with a limited-edition special forces coin. Soon, almost every unit had its own coins, and some even minted commemorative coins for particularly hard battles and distributed them to those who lived to tell the story.

There are usually several different presidential coins. One is for the inauguration, the other is for his government, and the other is for the general public to buy in gift shops or online. But there is a special official presidential coin that can only be accepted by shaking hands with the most powerful person in the world. As you might guess, this is the rarest and most popular of all challenge coins.

The president can distribute a coin at his discretion, but it is usually only used for special occasions, military personnel, or foreign dignitaries. It is said that George W. Bush left coins for wounded soldiers returning from the Middle East. President Obama often distributes them to soldiers who climb the stairs on Air Force One.

Many different organizations are now using challenge coins. In the federal government, everyone from the Secret Service agents to the White House staff to the president's personal servants has his own challenge coin. The coolest coin is probably the White House military aides-they carry atomic footballs-their coins are naturally in the shape of a football.

However, to a certain extent, everyone has joined this tradition due to the existence of online custom coin companies. Today, it is not uncommon for the police and fire departments to own coins, and many civic organizations such as Lions Clubs and Boy Scouts also own coins. Even the Star Wars role players, Harley-Davidson riders, and Linux users of the 501st Legion have their own coins. Challenge coins have become a long-term, highly collectible way to show your loyalty anytime, anywhere. 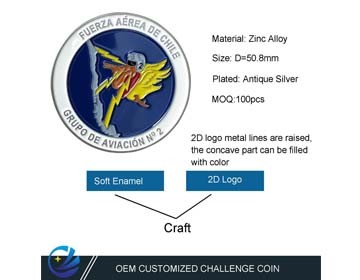