NEWS
You are here: Home » News » What Are Challenge Coins and What Do They Represent?

What Are Challenge Coins and What Do They Represent?

You are participating in a military ceremony. Soldiers are honored for service outside the scope of their duties. When he approached the unit commander to receive the reward, he saluted and then reached out to shake hands. In the palm of the army commander, before he clasps his hands, you will notice a trace of metal. Want to know what it is? Well, you have seen the first challenge coin.

The simple answer is: Challenge Coin is a specially designed coin. Grant someone to confirm membership in an organization or group. Challenge coins can also reward a person's special achievements.

Challenge coins are small metal coins that fit in the palm of your hand. They are made of metal. Each challenge coin has a unique design of the organization it represents.

What does the challenge coin stand for?

Challenge coins represent organizations, units, and teams. They can also represent achievements, anniversaries, or special events. They build close, lasting bonds between those who accept and stand up. They have a long tradition in military history. But the military is not the only service that uses them. Emergency services also have a history of using challenge coins.

Civilian groups began to use challenge coins to represent their business achievements. This is a new method that represents a challenge coin. They are using them to build team morale, connect people with similar interests, and even promote their own brand. 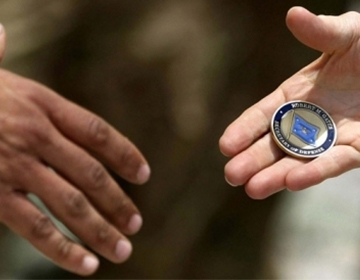 As we all know, service personnel collect a lot of challenge coins in the army. They feel proud and belonging when they display various coins.

Government agencies and politicians are using challenge coins to identify first responders in the community. This creates a sense of honor and unity in times of tragedy and loss.

What is the purpose of the challenge coin?

The purpose of the challenge coin depends on why it was made in the first place. It can be used for membership, recognition, to establish connections between people in a group or to commemorate anniversaries or special events.

In the early military history, they were used for security. Service personnel may be required to show coins to prove their loyalty. It may not be necessary today, but being a team member is still a strong military tradition.

The tradition of challenging coins allows members of the army to keep in touch with each other even after leaving the army. Veterans often display coins of the units they serve, the tasks performed, and the leaders they meet. In the event of a tragedy, the first responder will receive coins for heroic contributions.

Challenge Coin pays tribute to the events shared by the members of the organization and creates a bond that can last a lifetime.

Recently, plating Challenge Coins have been used to identify company brands or logos. The company started distributing these documents at conferences, sales events, and trade shows. Challenge coins are definitely more memorable than business cards. Even schools and sports teams have joined the trend. Mascots and logos are placed on coins to be distributed at local events in the community.

Where to get challenge coins

What is a challenge coin? This is a great way to identify individuals, teams, or give meaning to events or achievements. They establish lasting bonds between team members and encourage hard work.

Challenge coins are an unforgettable and unique great gift. Whether you want to recognize service personnel, first responders, or valuable team members, challenge coins will make this moment special and memorable.