NEWS
You are here: Home » News » What Is Challenge Coin

What Is Challenge Coin

What Is Challenge Coin

A challenge coin is a coin or medal made by a group and distributed to the participants of the group. Challenge coins are usually printed with a group's seal or logo, and their slogan or various other identifying pictures or words. They are usually used by different groups in the armed forces and law enforcement to show that they belong to a system or team.

However, how did these unique gifts begin? Challenge coins have been used throughout history and have also contributed to protecting the lives of soldiers!

The challenge coin is a colorful and unique coin that is awarded to service personnel by superior officials or supervisors to thank them for their outstanding work. There are various traditions, and no one knows exactly when or how to start using it, but the general consensus is that this practice started with the Navy and it is still very powerful. The idea of challenge coins has spread to all military departments and similar civilian positions (for example, law enforcement), and even corporate offices, where there will be more exquisite coins to express gratitude.

They are usually large one-dollar coins or medals, but they can be larger and made of any design, color, or geometric shape. Most coins have their own personalized accessories that make them unique and also include the organization's logo or motto. Its purpose is to commemorate a specific goal or achievement while increasing morale and showing respect for those who received coins.

The first use of challenge coins in human history was the ancient Romans. The Romans were one of the most powerful armies in history. They conquered large areas in a short period of time.

The commanders of the Roman army witnessed the success of their soldiers in battle and recognized their fearless and courageous behavior. They have personalized coins made by these patient soldiers, which show their names, equipment, and their victories in battle. This helped to improve the morale of the troops and also commemorated the most glorious moments of these soldiers.

However, challenge coins were not only used by Roman soldiers. During the Renaissance, they were also used by powerful family members. Upper-class families often donate "portrait coins" to the family and friends of participants. These portrait coins usually have the recipient's avatar or similarities on one side, and the family members' seals or badges on the other side.

These coins are usually provided when a person has achieved extraordinary achievements. They are also used to commemorate special events such as marriages, birthday celebrations, and death.

From presidents to soldiers, challenge coins have been a crucial armed forces custom for well over a hundred years. Coins can be available in various shapes and sizes, from round necklaces to pentagons, dog tags put on around the neck, and extra. Army members frequently use them to reveal their loyalty when they're tested.
Even so, there has been a current increase in private challenge coins. While a private challenge coin may not hold the specific weight or definition as an army coin, they're still unique symbols. 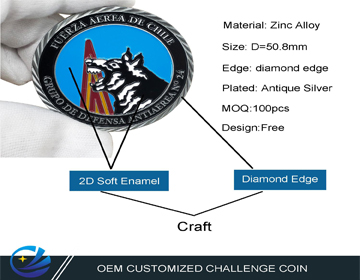