NEWS
You are here: Home » News » Company news » What is the design philosophy of military coins?

What is the design philosophy of military coins?

In the world, major countries and their militaries attach great importance to the construction of the meritorious service and honor commendation system, and take the medal system as an important part of the military award system, to play its unique role in commending heroic acts and sacrificing spirit, stimulating the fighting spirit of soldiers, and improving the public's concept of national defense. The provisions on the establishment, design and management of foreign military decorations and military coins are also worth studying and drawing lessons from. Then, let's introduce in detail what is the design philosophy of military coins? 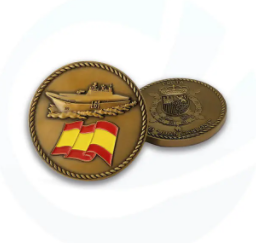 The function orientation reflects the commendation to the soldier's excellent performance. In foreign countries, it is common to see white-haired old soldiers with military coins on their chests at official festival celebrations. These military coins are not only the proof of the host's military and war experience but also the country's praise for their heroic acts, sacrifice, and excellent service performance is a symbol of honor. Generally speaking, the highest military honors of each country mainly honor soldiers for bravery and sacrifice in battle. As the highest honor for U.S. military personnel, the Medal of Honor is the only medal awarded by the President in the name of Congress and is often also referred to as the Congressional Medal of Honor. The Medal of Honor is awarded to those who have performed acts of extraordinary bravery above and beyond the call of duty in combat with hostile forces at the risk of their own lives.

The graphic design highlights the battle logo to reflect the fighting idea. Insignia and military coins in the armed forces of different countries vary in color, shape, and size, and each has its characteristics. However, its composition design more or less contains soldiers, flags, swords, horses, shields, scepters, and other war-related elements; The military coins awarded by each military service will appear eagles, aircraft, anchors, tanks, and other military characteristics of the pattern. At the same time, the shape of the medal sometimes reflects the differences in the level and type of military achievements. The Medal of Honor, Silver Star, and Bronze Star are in the shape of a five-pointed star, while the Army Distinguished Service Cross and the Distinguished Flying Cross are in the shape of a cross. Medals for good conduct and participation in specified campaigns, expeditionary operations, or military operations other than war, usually circular in design. This design not only reflects the different values of the medal but also makes the medal more diverse.

Issued wearing regulations should be strictly by the chapter. Bourda served in combat in 1965 and 1973, but according to his certificate of honor, he could only wear a "V" combat medal for the 1973 award. Wearing an extra medal was deemed to be "stealing honor". Later, although Bourda took off his "V" combat medal, the media still hounded him. Under intense pressure to avoid tarnishing the Navy's image, Burda committed suicide. Bourdain's death is sad, but it shows how carefully and rigorously the U.S. military awards and wears its military coins. In fact, in the United States and Russia, and other countries, the category, grade, function, the object of the award, the occasion and position of wearing the medal, which accessories to add and the order of various kinds of military coins there are relevant regulations and regulations to make clear provisions. In other words, no matter the medal, the medal, or the commemorative badge, it should be worn according to the "chapter".

After reading these, I believe you have some understanding of the military military coins. It's not that hard, and it's even easier with YC Gift.